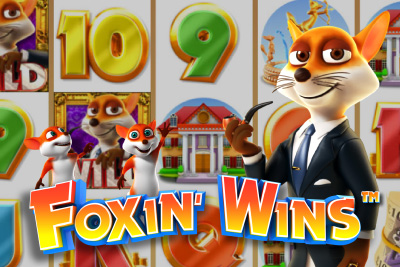 This Foxin’ Wins slot is probably one of our favourite NextGen online slots. So we were overjoyed when they made an extra effort to make it into a beautiful mobile slot, despite a couple of small bugs.

We might as well break the news hard and fast – like a bandaid, it hurts less if you rip it off in one go. This mobile game has a few bugs on Android devices, specifically smartphones. iOS and iPad? Beautiful. Android phone? Still beautiful but… you’ll have the scroll down the game to see the full Foxin Wins game without the annoying browser menu at the top. If you use the auto spin function, sometimes the reels can appear to get stuck. However, we’ve found that if you stop the auto spin function and just press a little randomly on the screen, the reels will stop and you can continue your game unmolested.

Maybe you’ll be luckier than us and won’t see any bugs. Either way, why are we trying to give you solutions rather than tell you to walk away? Because we LOVE this mobile slot. Foxin Wins is simply fun.

The Superbet feature which allows you to increase the number of random wilds is exquisite. The fox cubs that pop out of the screen to give you the wilds are flawlessly animated. The gold pot scatter that jumps out full of coins when you win with the symbol jump out of the screen. The free spins bonus feature actually gives out decent wins. The random cash features are exciting and fun when they show up out of nowhere to surprise you.

We particularly love the theme. An affluent fox surrounded by all the best that life can give and his four naughty cubs that get in the scenery are wonderful regardless of your sex. The gold guilted frame, the icy blue tones during the free spins… everything just make us want to play longer. Add to that wonderful features, that if they do not rival some of the more unique latest mobile slots releases, certainly zooms past all other NextGen mobile slots.

So despite a few bugs, you’ll soon not even notice the tiny flaws in the enjoyment of this 3D 25 payline video slot. The only question you’ll really ask yourself is… why is a fox chasing a leprechaun anyway?

(Lucky's note: We send out the latest and best casino bonuses when we get them. Don't miss out, Subscribe today!)

Wild: The Gentleman fox is your wild symbol, replacing all other symbols except scatter.

Superbet and Random Wilds: An additional wager that you can place by adjusting the lever on the side, having it off will give you only one fox cub on reel three, turning random symbols wild. Superbet level 1 (35 rather 25 coins), you'll get pups on reels 2, 3 & 4. Superbet level 2 (50 coins), the cubs will appear randomly on all reels and far more often, giving bigger wins. When you consider that the you can bet only a minimum of 0.50 per spin to have this feature, we are happy to pay a little more.

Free Spins: 10 free spins when three or more pots of gold scatter symbols appear anywhere on the reels. During the free games the fox pups appear more frequently, giving you bigger wins and more action. All wins during free spins are doubled AND they can be re-triggered. Good fun and worth the wait.

Fox Fund Random Bonus: After any paid spin, Mr Fox may pop across the screen and shower you with gold.

Leprechaun Shake Down Random Bonus: No we don't know why a leprechaun shows up, but Mr Fox sure is keen to catch him. Watch the leprechaun run across the screen as the fox tries his best to catch him. If he does, you'll be awarded a bigger win than during the Fox Fund bonus, but be prepared to walk away from a few of these random catches empty handed. That leprechaun is a sneaky one.

Ok, so NextGen have a couple of bugs to fix on the Android platform. So what? Foxin Wins mobile slot is a hell lot of fun and the bugs are fixable within the game so you don't have to break the flow of the game play. Yes it's true, we've been far less charitable in the past for NextGen mobile slots simply because of a badly thought out design or feature, but this mobile game is NextGen finally getting it right.

Although low volatility, Foxin Wins pays out little but often, keeping you entertained on your tablet or smartphone. With great features, a fun theme and wonderful 3D animations, we are prepared to forgive a few technical hiccups for a great NextGen video slot.

You might also want to check out a few of the other Foxin Wins slots that came after this including Foxin Wins Again, Foxin Twins and Foxin Wins Football Fever.

Or you can play Foxin’ Wins at one of these mobile casinos:

Like what you've read? Let the cat out of the bag.