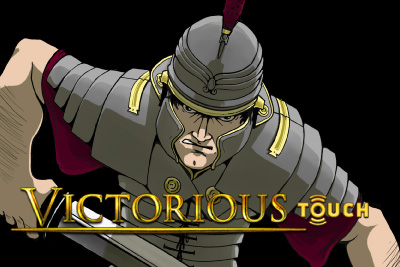 What is this mobile slot about?

NOTE: This version of the game no longer exists, as NetEnt have replaced it with slightly new mechanics. Please read our Victorious Max slot review instead.

Roman themed, the whole host of characters from the ancient empire are represented. However, we wouldn’t call this slot game a Victory by any means.

This Victorious mobile slot has fairly basic graphics, almost comic like. We would even go so far as to say that they lack impact with the fairly impressive Caesar, centurions, soldiers, golden eagles and laurel wreaths sitting side by side with incredibly plain beige high cards. Did the Romans not have any colours in their lives? The warlike atmosphere, at least, makes this Victorious slot more interesting and we have to give it to Net Entertainment games, they know how to create mobile slots that work flawlessly on Android, iPhones and iPads.

The features are fairly standard for a NetEnt slot game, but there are 243 pay lines which is always nice to see on a mobile slot. Winning spins are therefore quite common, but anything over 20x your bet is a rarity.

For a mobile video slot that calls you to glory and battle, it quickly fizzles out to very little excitement. It’s a little like being promised a battle worthy of an empire, and instead you end up playing pretend in the park with wooden swords. Sure, if you close your eyes the hits might feel reel, but you’ll quickly know the girls/boys won’t be falling at your warriors feet.

This is mostly because Victorious Touch is very low variance. Which in itself isn’t bad, as you may be in a park instead of a battle field, but at least you’ll get to play for a nice long time without the fear of losing all your money quickly. Which is reflected in the high and generous return to player rate of 96.9%.

But you know what they say, no guts, no glory. Or in this case, no big jackpot or big slot wins. Still, we’ve come out on top with this slot game, but just make sure you know when to walk away… which is pretty much any time you are at least 20% over your starting budget. Even the free spins with a 3x multiplier won’t save you here my friends, you’ll walk away with maybe 30x your bet on most occasions.

(Lucky's note: We send out the latest and best casino bonuses when we get them. Don't miss out, Subscribe today!)

Golden Eagle: This Wild symbol is slightly different as it substitutes all other symbols, including the much sought after laurel wreath scatter symbol.

Laurel Wreath Scatter: Bad news, to get the free spins you not only need to get 3, 4 or 5 of these symbols, but they have to appear in succession. This is where the wild symbol will show up and help you out.

Victorious is not impressive for a NetEnt Touch slot, but still head and shoulders above many slots on mobile. You won't be winning any life changing amounts, but at least you'll be able to play in the park for quite a while longer than in most other mobile slots.

If you want something a little harder hitting with the same theme, we recommend IGT's Treasures of Troy instead.

Or you can play Victorious at one of these mobile casinos:

Like what you've read? Let the cat out of the bag.